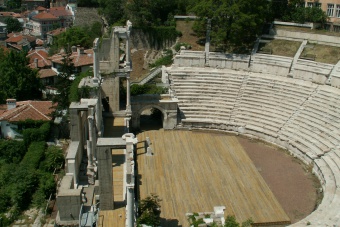 *Accommodation in a double room in 3/ 4 star hotels specified in the itinerary, or similar, on a full board basis (including coffee, tea and mineral water).
*Transportation in an air-conditioned private vehicle with driver.
*All visits and excursions provided in the itinerary.
*Local English-speaking guide.
*All entry tickets to the places of visit, according to itinerary:

Arrival, reception and transfer to our hotel in the Bulgarian capital. Dinner and overnight at our hotel.

DAY 2. SOFIA - PLOVDIV - HISARYA.
After a transfer of 1 hour and a half (130 km.) we will visit the second largest city in Bulgaria: Plovdiv. In the year 342 BC. Philip II of Macedon conquered the settlement of the Thracians and turned it into a prosperous city center called Philippopolis. In AD 45 the city was conquered by the Romans and was renamed Trimontium. The Romans rebuilt it according to the Roman architectural tradition. From the 4th century the city played the role of capital in the administration of the province of Thrace.
Even more interesting to visit is the old part of the city. Here the picturesque houses of Bulgarian National Revival are next to the ruins of antiquity. The central part of the city is built towards the end of the 19th and early 20th century. The influence of European styles on architecture is well present.
The Old Plovdiv is an architectural and historical reserve, located on three hills. The first settlements go back to antiquity. At the highest elevation - the complex of the Nebettepe fortification - there are remnants of prehistoric settlements, the wall built by Philip of Macedon, not rebuilt until the invasion of the city by the Turks, ancient citadels, basements, towers, a dam medieval (today covered by a dome of metal structure) and other remains.
At the end of the day we will make a one hour transfer (48 km.) to the city of Hissar where we will enjoy a relaxing two-nights wellness stay. The city of Hisarya, with its 22 springs of mineral water, was developed by the Roman Emperor Diocletian and named Diocletianpolis, "Town of Diocletian". Accommodation at the Hissar Spa Complex **** hotel.

DAY 3. HISARYA - KAZANLAK - STAROSEL - HISARYA.
This day is dedicated to Thracian culture and civilization in the famous valley of the Thracian kings. The area is believed to have a special significance for the inhabitants of the Thracian city of Seuthopolis, capital of King Seuthes III who ruled the Thracian tribe of the Odrisians in the 4th century BC. For this reason the valley preserves numerous tombs of nobles and Thracian kings. We will visit the tomb of Golyama Kosmatka, belonging to the Thracian king Seuthes III. We will also visit the tomb of Kazanlak, which is located near the ancient Thracian capital of Seutopolis, a part of an important Thracian necropolis. The monument dates from the 4th century BC. and is inscribed on the list of UNESCO World Heritage. In the afternoon, we will visit the village of Starosel which is 20 km from Hisarya (approximately 1 hour from Kazanlak.), where we will visit the Thracian cult complex, discovered in the year 2000. Towards the end of the afternoon, we will return to our hotel.

DAY 4. HISARYA - KOPRIVSHTITSA - BANSKO - SANDANSKI.
Today we will visit the nearby city-museum of Koprivshtitsa. It is a picturesque city that contains 250 samples of Renaissance architecture. It has great importance in the Bulgarian history, since in this city the uprising of April 1876 began. In the afternoon we will visit the old part of the city of Bansko. The architecture of the typical Bansko houses from the Renaissance period (18th – 19th centuries) is an architectural model of a fortified house. There then follows a visit the Church of the Holy Trinity which is a basilica with three naves, built in 1835 by local artisans. In the afternoon we will arrive at the city of Sandanski, the birthplace of the legendary Thracian slave Spartacus. Due to its proximity to Greece and its renowned medicinal waters, the city is a famous mineral spring spa. We will stay for two nights here. Dinner and overnight at the Sandanski Hotel & Spa ****.

DAY 5. ROZHEN - MELNIK - SANDANSKI.
Today we will visit the Rozhen Monastery “Nativity of the Virgin”, which is located about 20 km from our hotel. The despot Aleksiy Slav builded it in 1220, on an ancient pagan sacred land. From the. 14th to 17th century the monastery served as a spiritual and literary center and, at the same time, as a school of calligraphy. We will then visit Melnik, one of the smallest cities in Bulgaria with a population of 200 inhabitants. (about 15 km from our hotel). The history of the city goes back to the 1st and 2nd centuries when a Roman-Thracian settlement was located here. In the 11th and 12th centuries, however, Melnik became a strategically important Bulgarian fortress. At the end of the 12th-. and the beginning of 13th is the capital of Aleksiy Slav, the governor of the region. Melnik is also an old wine center. The city is very popular as a wine region since 1346. Before returning to our hotel, we will visit a winery and we will make a tasting of different wines.

DAY 6. SANDANSKI - THESSALONIKI - VERGINA.
After breakfast we will cross the Bulgarian-Greek border and after a transfer of an hour and a half we will arrive at the city of Thessaloniki, which we will visit. Thessaloniki, the second-largest Greek city and capital of the northern region of Macedonia, is the main port of the Aegean Sea. The most important points of the visit will be: the White Tower, the old Heptapirgion fortress, the Church of San Demetrio, the Rotunda and Galerius Arch, declared a World Heritage Site. At the end of the day we will arrive at our hotel, located near the city of Vergina, where some of the most important exhibits from the Macedonian dominated period of the Greek history are available. Dinner and overnight at the hotel.

DAY 7. VERGINA - METEORA.
Today we will visit the nearby town of Vergina, the place where we will find the Macedonian royal tombs. The most spectacular is the crown and the ark of gold found in the tomb of Philip II, father of the famous Alexander the Great. Later, after approximately 2.15 h drive we will visit the monasteries of Meteora, known as the Monasteries "suspended in the air"; classified as a World Heritage Site by UNESCO. They are up to a height of 600 meters and are inhabited since the 14th century. These Orthodox Christian Monasteries are an important place of Greek Orthodox monasticism. The first monks who inhabited the Meteors in the 11th century, were hermits who lived in the caves and who wanted to be closer to the Creator. A large number of the monasteries were destroyed or ruined during the Second World War by the German troops, because the Greek resistance took refuge in them. Today, only six monasteries are in use (five are male and one is inhabited by nuns). After the visit of the monasteries we will arrrive in our nearby hotel for an overnight there.

DAY 8. METEORA - DION - SANDANSKI.
Today we will visit the ancient city of Dion, which owes its name to the proximity of an important sanctuary of Olympian Zeus. During the Roman period, it was converted into a colony. The archaeological site of Dion was first identified by the famous English traveler William Martin Leake on December 21, 1806, in the neighboring ruins of Malatria. In the afternoon we will cross again the Greece - Bulgaria border and we will arrive at our hotel in the city of Sandanski. Dinner and accommodation.

DAY 9. SANDANSKI - RILA MONASTERY - SOFIA.
Today in the morning we will visit the Rila monastery (about 100 km from Sandanski), the largest monastery in Bulgaria and inscribed on the UNESCO World Heritage list. The hermit Ivan Rilski founded the Rila Monastery in the 10th century. Later, the Orthodox Church proclaimed this hermit holy. In the Monastery there are icons, wall paintings and wooden carvings of great value. After lunch we will continue our journey in direction of Sofia (130 km). In the afternoon we will visit the city center of the capital: the Alexander Nevski grand cathedral with its collection of icons, located in its crypt (one of the best collections of orthodox icons in the world; the church of Saint Sophia, the Saint George church from 4th century AD), etc. In the afternoon we will return to our hotel.

DAY 10. SOFIA – AIRPORT.
Depending on your time of departure, you will have some free time to go shopping or for other leisure activities. Transfer to Sofia airport. Departure.