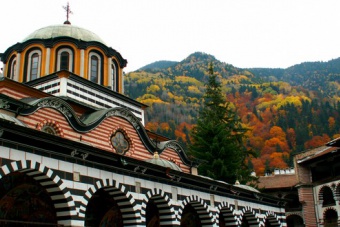 Included services:
*Transportation in an air-conditioned private vehicle or minivan.
*Pick-up from your hotel in Sofia.
*All visits provided in the itinerary.
*Local English-speaking guide.
*All entry tickets to the places of visit, according to itinerary:
*Lunch (including mineral water, tea or coffee).

Rila Monastery and Melnik (one day)

After pick-up from you hotel and a transfer of one hour we will visit the Rila monastery, the largest monastery in Bulgaria and inscribed on the UNESCO World Heritage list. The hermit Ivan Rilski founded the Rila Monastery in the 10th century. Later, the Orthodox Church proclaimed this hermit holy. In the Monastery there are icons, wall paintings and wooden carvings of great value.

In the afternoon we will make a transfer of 1,5 hours and we will visit Melnik, one of the smallest cities in Bulgaria with a population of 200 inhabitants. The history of the city goes back to the 1st and 2nd centuries when a Roman-Thracian settlement was located here. In the 11th and 12th centuries, however, Melnik became a strategically important Bulgarian fortress. At the end of the 12th-. and the beginning of 13th is the capital of Aleksiy Slav, the governor of the region. Melnik is also an old wine center. The city is very popular as a wine region since 1346.

After lunch we will visit also the Rozhen Monastery “Nativity of the Virgin”, which is located about 6 km from Melnik. The despot Aleksiy Slav builded it in 1220, on an ancient pagan sacred land. From the. 14th to 17th century the monastery served as a spiritual and literary center and, at the same time, as a school of calligraphy.

On the way back to Sofia we will make a stop to a winery and we will make a tasting of different wines. Late afternoon we will come back in Sofia, drop-off at you hotel. End of the tour.