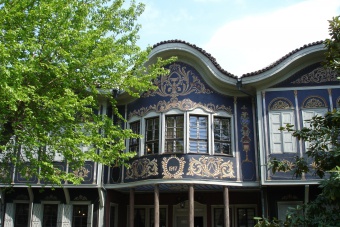 Included services:
* Accommodation in 3/4 star hotels, in double rooms with private bathroom.
* Full board, including coffee, tea and mineral water.
* Transportation in an air-conditioned minibus with driver or car, depending on the size of the group.
* All entry tickets to the places provided in the itinerary.
* All visits and excursions provided in the itinerary.
* Local English-speaking guide.

Services not included:
Flight.
Tips and personal expenses.
Other services not specified in the "included services" section

Flight towards Sofia. Arrival in the Bulgarian capital, reception and transfer to our hotel where we will spend the next two nights. Dinner and accommodation.

DAY 2. Sofia - Rila Monastery– Zemen Monastery - Sofia.
We will visit the Rila Monastery, the largest and most visited religious structure in Bulgaria, inscribed on the UNESCO World Heritage list. The hermit Ivan Rilski founded the Rila Monastery in the 10th century. Later, the Orthodox Church proclaimed this hermit holy. In the Monastery there are icons, wall paintings and wooden carvings of great value.
After lunch we will visit the Zemen Monastery , which was founded in the 11th th century and remained active until the Ottoman invasion in the 14th century. 500 years later, in the 19th century the monastery was restored. The main building of the complex is the church named after St. John the Evangelist. The monument with its unique frescoes belong to the initial foundation of the monastery. One of them depicts the scene of forging the nails for the Crucifix – a scene found only in this church. In the afternoon we will return to our hotel in the city of Sofia. Dinner and accommodation.

DAY 3. Sofia- Glozhene- Troyan Monastery – Bozhentsi
Today we will head northwest crossing the Balkan Mountains. We will visit the Glozhene Monastery, founded in 1224 and rebuilt in the 15-16th century. The legend says that the monastery was built by the Prince of Kiev George Glozh who founded and gave his name to the town of Glozhene. The architectural plan of the monastery copies the one of the monasteries of Mount Athos. The Central Balkans are among the largest protected territories in Europe. In the afternoon we will visit another remarkable spiritual monument – the Troyan Monastery. The Troyan Monastery, founded in the 16th century, is the third largest monastery in Bulgaria. It is the home of one of the holiest icons in Bulgarian Orthodoxy, the Three-Handed Virgin. At the end of the day we will arrive at our hotel in the village of Bozhentsi. Here we will spend two nights. Dinner and accommodation.

DAY 4. Bozhentzi - Veliko Tarnovo- Arbanassi - Bozhentzi
After a short transfer we will visit the city of Veliko Tarnovo (“Great Tarnovo”)- one of the most picturesque Bulgarian cities, standing on the meander of the Yantra River, which snakes through the elevations of Tarnovo and the three hills – Tsarevets, Trapezitsa and Sveta Gora. After the foundation of the second Bulgarian kingdom (1186), the city becomes the capital and center of the medieval Bulgarian Empire. During the Middle Ages, the city was among the main European centres of culture and gave its name to the architecture and painting of the Tarnovo Artistic School. In 1393 the city was conquered by the Turks and burned. However, valuable architectural ensembles dating from the Bulgarian National Renaissance help maintaining the atmosphere of the past centuries. The buildings, placed one above the other on the city hils, the rocks, the cliffs and the Yantra River just below make up a structure of singular beauty. The old part of the city has been declared an architectural and historical reserve. In the afternoon we will visit the town of Arbanassi, which is a national architectural reserve formed by stone houses from the 16th and 17th centuries. The site is famous for its houses-museums and two monasteries. In the late afternoon we will return to our hotel.

DAY 5. Bozhentzi- Etara- Sokolovo Monastery -Tryavna- Hisarya
Today we will visit the ethnographic and architectural complex Etara. Etara is an open-air museum showing the local customs, cultures and crafts from mid-18th century to the end of the first quarter of the 19th century. The complex mainly reflects the architecture and way of life of the region during the Bulgarian National Renaissance. Later we will visit the neighboring Sokolovo monastery, from where a spectacular view opens over the neighboring mountains. After a short transfer we will visit the city of Tryavna – famous center of the local icon-painting and wood-carving schools. We will visit the old town with craft workshops, the square with the old clock tower, the authentic old bridge, and the wood-carving museum. In the afternoon we will cross the Balkans in a southwesterly direction, enter the Rose Valley region and arrive in the city of Hisarya, with its 22 mineral springs. The city was developed by the Roman Emperor Diocletian and named Dioclecianopolis, "Town of Diocletian". We will senjoy a relaxing two-nights wellness stay here. Dinner and accommodation.

DAY 6. Hisarya - Kazanlak - Starosel - Koprivshtitsa - Hisarya
This day is dedicated to Thracian culture and civilization in the famous valley of the Thracian kings. The area is believed to have a special significance for the inhabitants of the Thracian city of Seuthopolis, capital of King Seuthes III who ruled the Thracian tribe of the Odrisians in the 4th century BC. For this reason the valley preserves numerous -tombs of nobles and Thracian kings. We will visit the tomb of Kazanlak, which is located near the ancient Thracian capital of Seutopolis, а part of an important Thracian necropolis. The monument dates from the 4th century BC. and is inscribed on the list of UNESCO World Heritage. We will also visit the tomb of Golyama Kosmatka. This tomb belonged to the Thracian king Seuthes III. In the afternoon we will visit the village of Starosel, which is located 20 km from Hissarya. Here we will visit the Thracian complex, discovered in the year 2000. Later in the afternoon we will visit the city-museum of Koprivshtitsa. It is a picturesque city, with 250 samples of Renaissance architecture. It has great importance in the Bulgarian history, since in this city the uprising of April 1876 began. At the end of the afternoon we will return to our hotel. Dinner and accommodation.

DAY 7. Hisarya - Plovdiv
After a short transfer we will visit the second largest city in Bulgaria: Plovdiv. In the year 342 B.C. Philip II of Macedon conquered the settlement of the Thracians and turned it into a prosperous city center called Philippopolis. In AD 45 the city was conquered by the Romans and was renamed Trimontium. The Romans rebuilt it according to the Roman architectural tradition. From the 4th century the city played the role of capital in the administration of the province of Thrace. It became the seat of the General Assembly of the Thracians and the metropolis of this administrative territory. The remains of the residential districts, the water tanks, a part of the Forum, an old theater and a stadium dating back to antiquity were uncovered. The water circuit has also been preserved –a remarkable system of aqueducts, fortification accessories, terms, etc.
Even more interesting to visit is the old part of the city. Here the picturesque houses of Bulgarian National Revival are next to the ruins of antiquity. The central part of the city is built towards the end of the 19th and early 20th century. The influence of European styles on architecture is well present.
The Old Plovdiv is an architectural and historical reserve, located on three hills. The first settlements go back to antiquity. At the highest elevation – the complex of the Nebettepe fortification – there are remnants of prehistoric settlements, the wall built by Philip of Macedon, not rebuilt until the invasion of the city by the Turks, ancient citadels, basements, towers, a dam medieval (today covered by a dome of metal structure) and other remains. Dinner and accommodation in the city of Plovdiv.

DAY 8. Plovdiv - Sofia - National Museum of History - Boyana Church - Sofia
Today, after a transfer of an hour and a half we will arrive in Sofia. We will visit the National History Museum. After lunch we will visit the Boyana church, a medieval Othodox church situated on the outskirts of Sofia inscribed on the UNESCO World Heritage list. The Boyana church is famous for its frescoes, made in 1259 on older ones. They represent one of the most complete and best preserved examples of medieval art in Eastern Europe. In total, there are eighty-nine scenes with two hundred and forty human figures. In the afternoon we will visit to the city center of Sofia: the Alexander Nevski Cathedral claimed to have the largest collection of Orthodox icons in the world, located in its crypt the church of Saint Sophia, the Saint George church from the 4th century A.D.), etc.
In the afternoon we will arrive at our hotel. Dinner and accommodation

DAY 9. Sofia - Airport
Depending on your departure time you will have some free time to go shopping or for other leisure activities. Transfer to Sofia airport. Departure.